To celebrate the new year, we’re looking back at our top blogs of all time. We’re reflecting on what we’ve written, and looking forward to a new year, with new ideas, and new conversations.

This blog was written by Sam early 2014 about sexuality and gender fluidity: 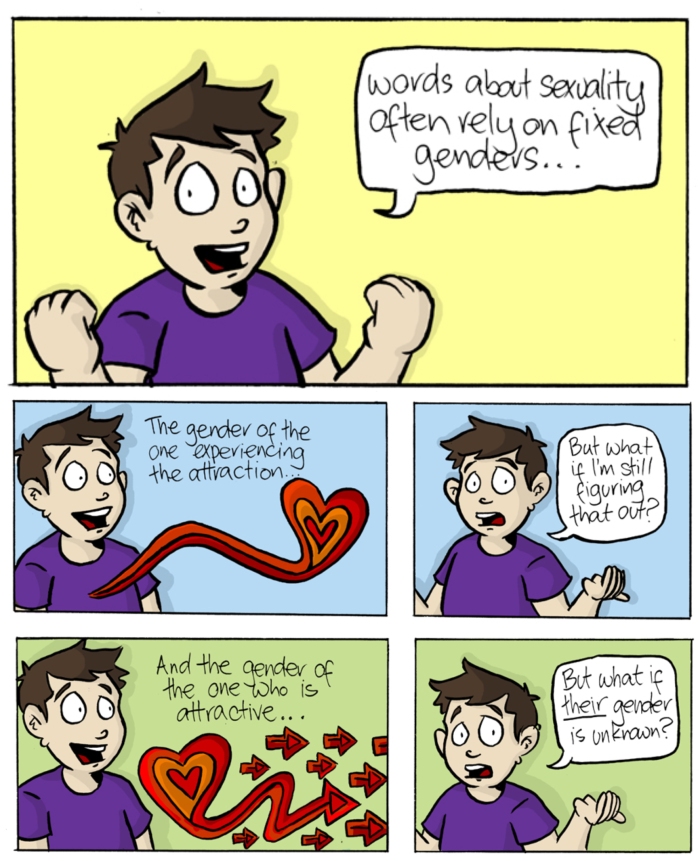 Last week this article about a self-identified gay man in a relationship with a trans woman, popped up all over my social media spaces.

It got me thinking about my sexual orientation, in relation to myself, and to my partner.

We all know that sexual orientation can be thought of as a continuum:

These continuums are based on your gender, and the gender(s) of people you’re attracted to.

But what if your gender isn’t fixed?

Or what if the gender of the people you’re attracted to isn’t fixed?

I’m a transman; when I was born the doctors said ‘It’s a Girl!’ and growing up I had a girl name, was treated like a girl, and pretty much lived life as a girl… but these days I live my life as a guy.

Some transpeople use the narrative of ‘trapped in the wrong body’, but that’s not my narrative. I really like my body, sure it’s not perfect (who’s is?), but it’s mine – and it just happens to be a trans one.

For some, going from Female to Male is a complete process; life starts at one end and they transition to the other end. For me, I wasn’t ever particularly successful at being a girl, and now even though most people read me as a guy, I feel like I still dance along that spectrum a little bit. To the world I look like a guy, but I still feel like my gender is a ‘work in progress’.

And then there’s the small matter of not being attracted to gender normative people.

So if everyone’s dancing up and down the gender spectrum, how am I supposed to label my sexual orientation?

The answer: I don’t.