I had been feeling pretty down about the election this year, lots of politicians were talking about issues that didn’t mean a lot to me, or were presenting quite horrifying policies. I felt lost, and confused – I didn’t feel represented, and it felt like I was going to have to make some big value compromises if I voted.

Then, at the Green Party AGM Metiria Turei stood up and talk about the importance of mending the Social Welfare ‘Safety Net’. She recounted her experiences as a single mum and student on a benefit, and talked about lying to WINZ to get enough money to survive. It sounded so familiar to me, for myself, and my friends. I felt a sense of connection to her and what she was saying – “There is something deeply, deeply wrong with our welfare system and how we treat the families who depend on it.” She talked about how the system made her poor, and made her lie, she spoke about how she felt on it, and how important it was.  “We will not be a government that uses poverty as a weapon against its own people. No working person will struggle to pay the rent. No beneficiary will live below the poverty line.” She said.

And then…. She was ripped apart.

Was she really that poor? What else did she lie about? But how starving was her child? The conversation stopped being about the welfare system, and became about her, and her individual choices.

Within a month she had resigned as leader.

Social welfare is such an important system, and it’s so important that it works well.

The one thing that sparked a connection in me, in all this campaigning, felt like it was off the table.

So I drew a picture. 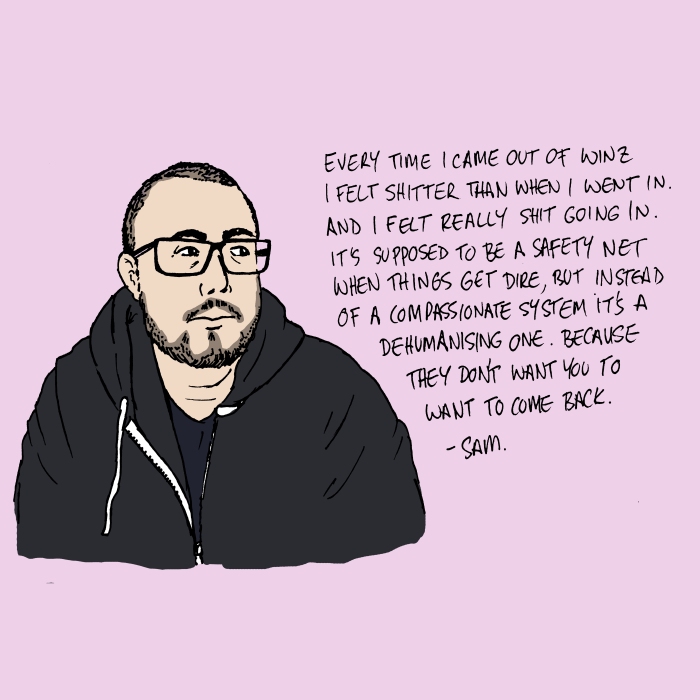 “Every time I came out of WINZ I felt shitter than when I went in. And I felt really shit going in. It’s supposed to be a safety net when things get dire, but instead of a compassionate system it’s a dehumanising one. Because they don’t want you to want to come back.” – Sam (self portrait)

And I shared it with some friends.

And they drew pictures too.

And then people started sharing their stories with us, and we started drawing their pictures.

We set up a page called #wearebeneficiaries (https://www.facebook.com/WeAreBeneficiaries/) to share these stories, and connect to each other, to show that our experiences aren’t isolated, and to show there’s a whole lot of us who are speaking up and demanding a better welfare system.

It’s been 13 days since we started, we now have over 50 artists volunteering, over 100 people sharing their stories, and our facebook page has over 3000 likes.